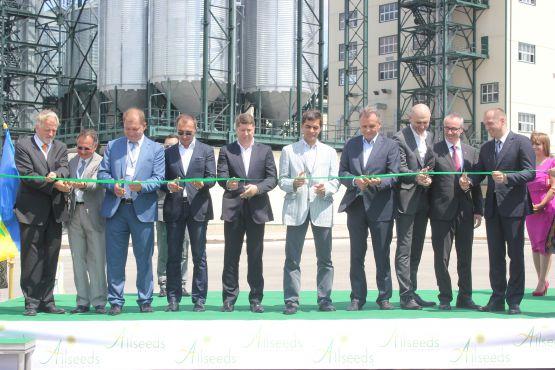 Official opening of oil-extraction plant of Allseeds Group took place on July 16, 2015 in Yuzhny port of Odessa region. This enterprise is of the highest production capacity and is innovative in terms of technologies in entire oil production industry of Ukraine.

The plant has modern high-efficient equipment from Italy, Germay, Belgium and Switzerland. In order to control the quality of incoming raw materials according to European standards, an independent Dutch laboratory NofaLab is operating in the oil-extraction plant and transshipment complex.

"The production capacity of the Allseeds company will not only settle Ukraine on the world oilseed market, but will also confirm the possibility of exporting of other commodity products," - said Minister. In his turn, Member of the Verkhovna Rada Committee on Agrarian Policy and Land Relations of Ukraine Leonid Kozachenko thanked Allseeds CEO Viacheslav Petryshche for significant contribution to the development of the oilseed industry in Ukraine.

Governor of the Odessa Regional State Administration Mikheil Saakashvili promised that the management of the Odessa Regional State Administration will pro-actively contribute to the creation of an attractive investment climate in the region. Also the Governor promised to solve the problem of obtaining permits for construction of the berth for the company.

"There is a monopoly on the port facilities in Ukraine. Our team will influence the decision of the port administration to let Allseeds company receive permission to build a port terminal to be able to export their products, "- Saakashvili said. In his welcoming speech, CEO of Allseeds Group of companies Viacheslav Petryshche first of all thanked the investors for their trust and support, as well as every builder for operational work, because the plant was built in just 17 months.

"Despite the hard times for the country, our company has fulfilled its promise and built a plant in just one and a half years. Allseeds oil-extraction plant is the most modern plant for processing oilseeds in Ukraine and one of the largest in Europe. The first line of the plant is only 20% of the overall construction project till 2021, "- Mr. Petryshche said. Also Viacheslav Petryshche proposed regional administration to include the company in the list of investors for the development of the railway track station "Beregovaya". It will expand the workload of station to 10 million MT and will promote the further implementation of the Allseeds company’s projects.

The total amount of investment in the construction of the plant and terminal with infrastructure is estimated at USD 600 million and is one of the largest investment projects in the agricultural sector of Ukraine in recent years.