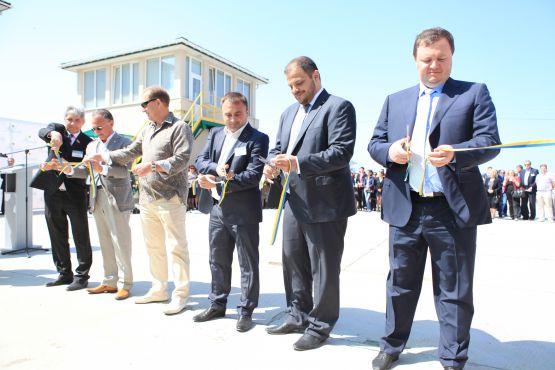 On the 20th of May 2015 in the Port Yuzhny of Odessa region was held the official opening of the elevator complex of the 2nd stage of oil-extraction plant of Allseeds.

The event was attended be the Consul of China in Odessa, a delegation from Estonia, head of the Odessa Regional Council, head of the Comintern District State Administration, farmers and invited guests.The head of the Odessa regional council Mikhail Shmushkovitch noted that the opening of the raw grain elevator is not just an economic event in the life of the district and the Odessa region, but a significant event for Ukraine. He stressed that the investment project of the Allseeds in the Odessa region shows that despite the difficult situation in the country, investment projects continue to function. "This oil-extraction plant is one of the first trigger mechanisms which will run the Ukrainian economy and make life better," - said Shmushkovitch.

Director of the Department of Economic Development and Trade of the Odessa regional administration Oleg Muratov thanked investors, who continue to finance the region in a difficult period for the country. He emphasized that such projects proved the investment attractiveness of the Odessa region once again. On behalf of all local administration officials, he wished success and prosperity to Allseeds team. Commenting on the event, the head of the Comintern District Council Gennady Teftul thanked the Allseeds for significant contribution to the development of Comintern district. Official also noted the importance of the putting into operation enterprise of the European level with high-tech equipment. Completion of the elevator complex will not only increase the processing of oilseeds, but will pay dividends, and increase revenues for the local budget, which means the development of local communities and a new quality of life.

Officials of Odessa region noted that the Allseeds stands on leading place among the companies of European level, which creates workplaces and continues to invest, despite the difficulties and obstacles.The CEO of the group of companies Allseeds Viacheslav Petryshche informed that despite the situation in Ukraine, Allseeds investors will continue their work, as are the real patriots of the country. "Today are opening one of the lines of oil-extraction plant, more particularly - silo on reception of sunflower seeds. In a month and a half the company will launch the plant completely", - said Allseeds CEO.

Viacheslav Petryshche also stressed that for two years of the construction the company has been invested about 200 million dollars, the other projects are going to bring about 400 million dollars for the construction of roads and port berths. He expressed hope for support of the regional and district state administrations considering that company is going to realize all planned projects. "I can confidently say that we are guided by the principle of absolute transparency and openness in business, in particular, we follow international standards, our products are high-quality and certified," - said Viacheslav Petryshche.

Allseeds has created 250 workplaces by opening the elevator complex of the oil-extraction plant. In the future the company will create about 1,000 more workplaces with the completion of construction of oil extraction-plant. After the official part of the event the Fourth Regional Investment Forum took place, during which was signed a memorandum on cooperation between the Comintern District State Administration and Allseeds CEO.