CEO of Allseeds Group Viacheslav Petryshche: Russians with their shallow ports and "sprat" fleet are no competition for Ukraine in terms of sunflower oil production 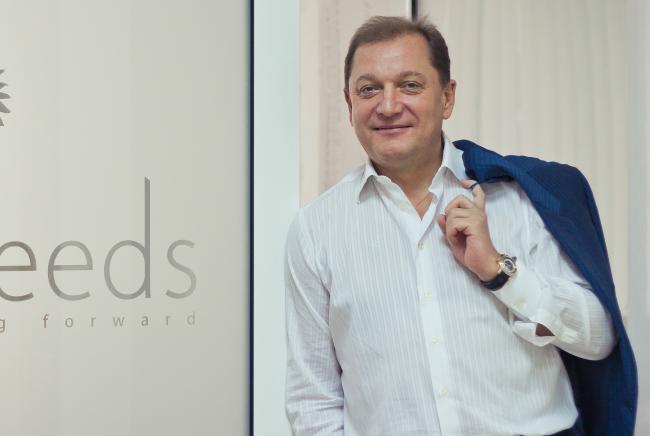 Viacheslav Petryshche, CEO of Allseeds Group, gives interview to Interfax-Ukraine. Ukraine's completed harvest of sunflower seeds, having cropped more than 11 million tons, according to official data. In your opinion, is there a potential for a further boost in sunflower see production in short term?

I think the number of harvested sunflower seeds nears12 million tons. Considering that as of today its average productivity is 2.1 tn/hectare with highest productivity at 3.5–4.0 tn/hectare, what is the perspective for the future? The perspective is that growth potential is in place, two-fold as a minimum. But this is conditional on new technologies entering Ukraine and on Ukrainian farmers’ readiness to implement them.

How active was the competition between Ukrainian and Russian traders on external markets this season?

Today, Ukraine does not have equal competition in the area of sunflower oil in world markets. Russia was competing with Ukraine only on specific markets, like Turkey and Egypt. It is difficult to say now how the situation will develop considering tensions between Russian and Turkey and consequent sanctions of Russia against Turkey. We have noticed increased interest of Turkey recently. They processed all their seeds, but still have to fulfill some import obligations on contracts with Russia. Besides, on the Ukraine-EU Association Agreement entering into force, Ukraine-made sunflower oil will be exempt from EU import duty, while Russia is still subject to import duty on sunflower oil from EU. Even more so, Russia is hardly a competitor in such markets as India and China.

When Russia’s sanctions against Turkey become effective, will Ukraine occupy Russia’s share of the Turkish market?

Sure, it will. Russians do not have deep waters port. They carry oil by small lots, so called “sprat fleet”.

At the same time, Ukraine has large deep-water ports. This is Ukraine’s other competitive advantage over Russia in sunflower oil.

In our ports, one can ship large and small tonnage tankers. Russians can do only small ones.

Your company intends to continue developing the oil-extraction project complex in “Yuzhny” Port. Right after launch, your company received legal approval to build it own berth. When do you plan to start construction?

Unfortunately, in our country words of officials rarely meet with their actions. On the opening of our plant in July, Governor of Odesa Region Mikheil Saakashvili, under the spotlight of dozens of cameras strongly “asked” the Administration of Sea Ports (ASP) of Ukraine allocate to us legal approval to move ahead with berth construction. He said: “We’ll find the land.” So after that, ASP has done their share. However, as per legislation, water and land are the competence of local authorities (oblast state administrations).

After almost half a year, decision on land for us is still there: “in competence.” Is response to our address (as of July) nobody has signed anything for us. Maybe in Ukraine nobody needs such an investment project, which can create up to 5,000 jobs in the region, and that the “summer” statement of the Governor about the “small mob” is still true: “Owners of private berths have agreed not to allow other companies in the port. This hinders investment flows in the region.”

But “Ukrlandfarming” has already received location for berth in Yuzhny?

Currently, the situation around sea berths in Yuzhny has become bizarre: flurrie of talks, lots of “behind-the-scenes” negotiations, and so on. To us, information regarding allocation of additional land for a berth for “Ukrlandfarming” sounds strange. We know the company already received 2 land plots in the water area of Adzhalyk Lyman. Please note, that in recent years “Ukrlandfarming” have not constructed a single berth, not a single piece of port infrastructure.

Accordingly, addition land allocation for Ukrlandfarming will seem quite weird. That is putting it mildly! Providing additional land plots to a company, which is worth nothing, but only declares it is — looks illogical from the state point of view.

Our company — by deed not by word — proved how it is possible to invest in Ukraine even in most difficult, let us say, wartimes.

We are ready to continue keep on with implementation of our oil-extraction complex in Yuzhny port, which is impossible without building our own berths with a grains terminal.

And, without a doubt we will follow the development of situation around water area in “Yuzhny” port, struggle along with our “land issue” here, acting publicly, informing communities, also via your Information Agency.

How quickly the berth can be constructed in case land is allocated?

The land allocation permit itself is only a start. After it’s received, a variety of other different documents must be accommodated. This may take up to eight months or even a year. These are the so called “10 circles of hell” before project conception is started. Project conception and construction will take up to two years more.

However, unfortunately, what many people do not understand, when accommodating documents for the berth construction, that berth is not a major object and our secondary goal and is only a beginning of continuation. Its only one of the composites, because it is also important to develop railway infrastructure. A berth is required primarily when infrastructure is there: existing plant, its second line, soybean processing plant, grains terminal. All this requires around $400 million of investment. Attraction of such investment is quite difficult, if you do not have prospects of obtaining a berth. Investors also are interested where transshipment of commodities will take place. Are we ready to execute transshipment within our own infrastructure? or we will depend on port monopolies?

So construction of your own transshipment facilities is also a matter of priority and importance for your company?

will repeat that for us it is “start of the continuation” In 2016, we plan to start projecting second line of the complex, which is in fact a copy of what is already operating processing 2,400 tons per day. After that, we will launch third line. We can start plant construction in the second half of 2016. It does not have sense to start earlier, because we will not make it by that start of the season, which is economically unprofitable.

What is the expected amount of seeds processed by your company this season?

This year we plan to process around 500,000 tons of sunflower seeds. Unfortunately, initially we planned a bigger figure, but at the launch stage, we faced an issue of a waste pellet mill. Very “branded” by the way. It is like in anecdotal situation, when your Mercedes has a flat tire and it is not quite convenient to drive it. So currently on our “Mercedes” we process sometimes 1,000 tons, sometimes 2,000 tons. It is fine for the new plant. We know from practice, that in Ukraine new plants become fully operational over the first two to three years. We have a great manager and people working there, capable of coping with problems big and small.

Your plant also is capable of processing soya beans. Have you worked with soya in current season?

Yes, we have a multi-crusher. However, we did not plan processing of soybeans and rapeseeds this year. As of today, we see enough sunflower seeds on the market and we keep working with that.

Can demand for sunflower oil grow on the backs of India and China in the long term?

It is growing today! These are two markets where consumption of oil increases each year. Many Chinese and Indian companies have developed their brands on the idea that Ukrainian sunflower oil is a healthy oil, good for health and so on. So demand in India and China is unlikely to ever go down, because people who invested in a brand will develop it and it means that the goods need to take its place in the supermarkets.

And additionally — from the optimistic point of view: sunflower oil as a relatively cheap, high energy product is very efficient from the point of view of family budgets in any country, even with low income per capita. Its accounts for a very small part of the cost in an overall market basket. All this supports increased demand globally.

Can you export sunflower meal to China?

Chinese are very attentive to quality of imported goods, especially in terms of quarantine and phytosanitary requirements. Oilseeds meals are no exception here. To the best of my knowledge, at the end of summer, China’s phytosanitary service put together a proposal to the Ukrainian side. According to this proposal, they are ready to certify Ukrainian enterprises according to Chinese standards.

Currently, the text of the document is being accommodated. Now, the ball is with the Chinese. Ukraine’s Ministry of Agrarian Policy and Food is trying to simplify certification procedure, explaining to the Chinese that there are plenty of small plants in Ukraine and certification can become a lengthy process.

To my mind, in this process, the Ukrainian side needs to be reasonably flexible, to not get stuck on unimportant details. In reality, sunflower oil will be delivered to China by large Ukrainian companies, which produce granulated meal. Smaller firms, producing press cakes, will not participate in this.

We, Allseeds, have built a modern enterprise.

The quality of our raw materials and products is tested in independent foreign laboratories, and we welcome Chinese colleagues to inspect us. Welcome!

Vegetable oil production capacities in Ukraine are said to be around 16-17 million tons — is this the case?

I do not know where this information is coming from. When we analyzed the long list of enterprises, which always take part in building statistical information, we got our short list. This amount of capacity, which you cite, includes all crushers with processing capacity of around 1 million tons. Mostly non-food seeds, not reflected in the reporting, may influence overall processing figures.

There are a couple of new soybeans plants, one of which belongs to Astarta, but they work only on soybeans. There is Polohivskyi Oil-extraction plant, which traditionally operates two lines: soybeans and sunflower seeds. There are some old and non-operational Soviet-era plants, included in the capacity statistics. There are plants in Donbass, nationalized by “republics.”

Kreativ has 850,000 tons of processing capacity, however, does anyone believe they will actually process the amount? I do not. In reality, Ukraine has the capacity to process 10-11 million tons of sunflower seeds, and not 16-18 million tons.

I think by next year we will face deficiency of capacity, and not of raw material. That is particularly true with the new harvest forecast at 13.5 million tons. That we will face rich sunflower seeds crops is almost a fact now!

How can you comment situation with VAT refund for the company?

We faced problems with VAT refund in January-August this year. At some point, we thought that Fiscal Service was simply ignoring us in this question. Maybe due to continued staff reshuffles: new heads needed time to go into all details. However, I wanted to thank my colleague-tax experts: from September 2015, we started to receive export VAT in automatic mode, being compliant with certain criteria for this.

What is your forecast for the sunflower oil price on the global market?

Around $800 per ton. At best, the price will fluctuate at this level, at worst – will go down.